The Pass and the Sanctuary of the Madonna del Ghisallo: one of the most popular destinations for cycling fans all over the world.

The Ghisallo Pass (Ghisàl in Lombard) is a road pass connecting the Valassina with the upper part of the Lariano Triangle. The pass point, at an altitude of 754 m s.l.m., is part of the municipality of Magreglio. A few meters from the pass is a small church: the sanctuary of the Madonna del Ghisallo. Its name (according to an ancient legend) derives from a certain Ghisallo who in medieval times in that place was attacked by brigands and made a vow to the Madonna to build a church in his honor if he escaped.

The ascent of Ghisallo (from the north side) is traditionally traveled by the Giro di Lombardia and has also been repeatedly included in the Giro d’Italia track. For this reason, the Madonna del Ghisallo is particularly revered by cyclists, and on the initiative of the then parish priest Don Ermelindo Viganò (1906-1985), in 1949 Pope Pius XII proclaimed her the universal patron of cyclists.

Next to the sanctuary stands the Cycling Museum; in the square in front of it there is a monument to the cyclist.

You can climb to the sanctuary from two sides. When speaking of “Ghisallo” or “Madonna del Ghisallo” cyclists almost always mean the road that goes up from Bellagio (north side), which presents the most challenging climb.

From the junction of the national road 583, at the exit from Bellagio, it has a stretch of about 4 km uphill, followed by about 3 km on the flat with short stretches of descent, then still 1.5 km uphill to the Sanctuary. The overall difference in level is just under 500 meters; the pass point is 754 m above sea level. The uphill sections have a fairly constant slope with an average of just under 9% and peaks up to 14%; also including the flat segment, the average slope is about 5.5%. There are many hairpin bends especially in the final stretch. The road is almost completely immersed in the woods. The best professionals are able to make the journey in less than 20 minutes (Paolo Bettini took about 19’30 “in the Giro di Lombardia 2005).

A more demanding variant is known as “Superghisallo”: the name was coined by Gazzetta dello Sport presenting the route of the 55th edition of the Giro di Lombardia, in 1961. It starts from Bellagio and follows the main road to Guello (where the first ascent section); here turn right, towards Monte San Primo, leaving the traditional path to the Sanctuary to the left. After a stretch of 500 meters on a slight slope, from Cernobbio begins a climb that, after passing the hamlet of Pra ‘Filippo, leads, after about five kilometers overall (6-7% of average slope with peaks of 10-11%), at 975 meters above sea level of Pian Rancio locality. [1] At the junction turn left and after about four kilometers of descent, you reach the square of the Sanctuary.

The opposite side (south side), which reaches Magreglio da Erba through Canzo and Asso (a variant reaches Canzo coming from Pusiano, another salt from Onno for Valbrona rejoining above Asso), salt much more gently, presenting significant difficulties (slope up at 10%) only in the last kilometer and a half.

From Asso it is also possible to go up to the Colma di Sormano (1124 m), along the main road (about 9 km with an average gradient of around 8%) or through the very hard Wall of Sormano, recently resurfaced.

The idea of ​​proclaiming the Madonna del Ghisallo Patroness of the cyclists was by don Ermelindo Viganò (Mediglia 1906 – Magreglio 1985), who from 1944 to his death was parish priest of Magreglio and first Rector of the Sanctuary (since 1949). The priest personally met with Pope Pius XII (1939-1958), who, following the presentation of the proposal by the Religious and Sports Authorities as well as the Runners of the Giro d’Italia of 1949, elected and decreed, with a brief papacy of October 13, 1949 , the Blessed Virgin Mary of the Celestial Ghisallo Patroness of the Italian Cyclists.

During the dedication ceremony, in 1949, a large bronze torch blessed by the Pope, the work of the sculptor Carmelo Cappello, was brought from Rome to the Sanctuary by a relay of cyclists; the last two torchbearers were Gino Bartali and Fausto Coppi. The torch is still present and always on, in memory of fallen cyclists and a manifestation of the faith of the living.
Next to the sanctuary stands the Cycling Museum; in the square in front of it there is a monument to the cyclist.
For many decades there has been among the champions of cycling (especially Italians, but not only) the custom of donating their own memorabilia to the Sanctuary of Ghisallo: among these there are for example the bicycles used by Bartali, Coppi and Merckx in their Tour victories de France, the special bike used by Moser for the record of the hour, and several pink, yellow and rainbow jerseys. 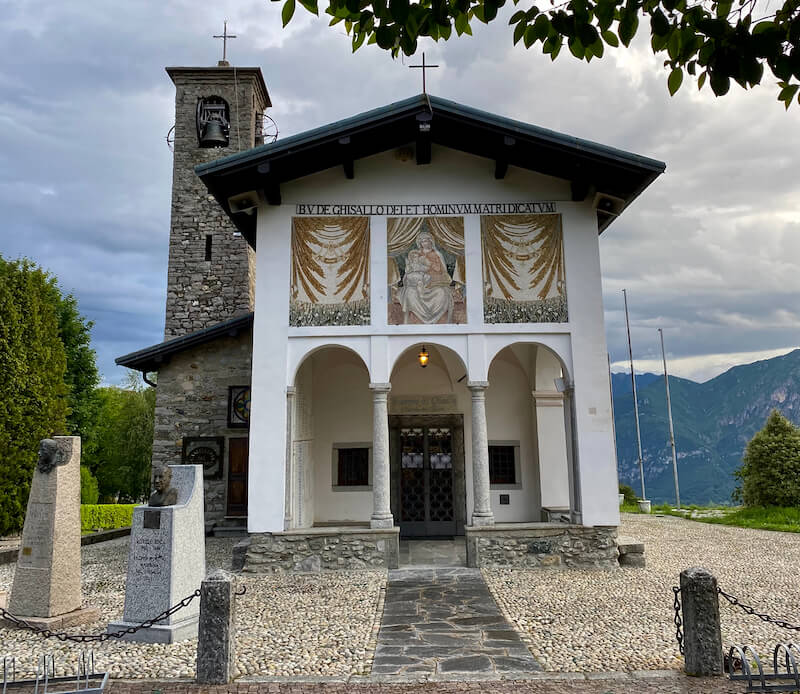