The construction of the church began in 1659 when, after demolishing the old church with the bell tower and the sacristy, the Abbot Giuseppe Rainoldi had a new larger church built at his own expense and on the same site. The works lasted for a long time with various interruptions. In 1728 the façade was completed while in 1764 the pronaos was completed.
The church, with east-west orientation, is located in an elevated position with respect to the road level and is accessed via some steps that allow access from the portal preceded by pronaos. The façade is divided into two orders by cornices and in the lower part is the portal preceded by a stone pronaos with columns and a tympanum with a lowered arch. In the upper order, framed by pilasters, there is a central opening with stained glass windows and at the top the façade is completed with a tympanum with a central oculus. Along the left side rises the bell tower. The interior has a single nave nave with six side chapels, presbytery and apse. In the first chapel on the right, with stucco decoration, there is above the altar the statue of St. Anthony of Padua and on the side walls two ovals with scenes from the life of the Saint. In the second chapel you can see an altarpiece of scagliola and the Crucifix of the nineteenth century, as well as two seventeenth-century paintings depicting Sant’Agata with a saint Abbot and the Saints Maternus, Narbore, Felice and Carlo Borromeo. In the third above the altar with scagliola antependium there is a painting with San Carlo Borromeo while the walls have stucco elements. The first chapel on the left is used as a baptistery, while in the second left chapel there is a seventeenth-century wooden confessional and a statue of the Assumption of 1735, which was probably originally located in the nearby sanctuary of Sommaguggio. In the third chapel there is a stucco altar with angels that frame the altarpiece depicting the Addolorata, probably seventeenth-century as the wooden pulpit placed between this chapel and the presbytery. The wooden Crucifix, probably from the 15th century, is also located near the triumphal arch, also transported from the sanctuary of the Madonna di Sommaguggio. The presbytery, bordered by a balustrade and some steps, is raised above the nave and has a marble and canteen altar, ambo and wooden seat. The walls of the apse, with wooden choir, were frescoed in 1964 by Mario Cornali with the representation, from left to right, of the Annunciation, the Announcement to the shepherds, Jesus in the Garden of Olives and the Announcement of Resurrection at the feet women. 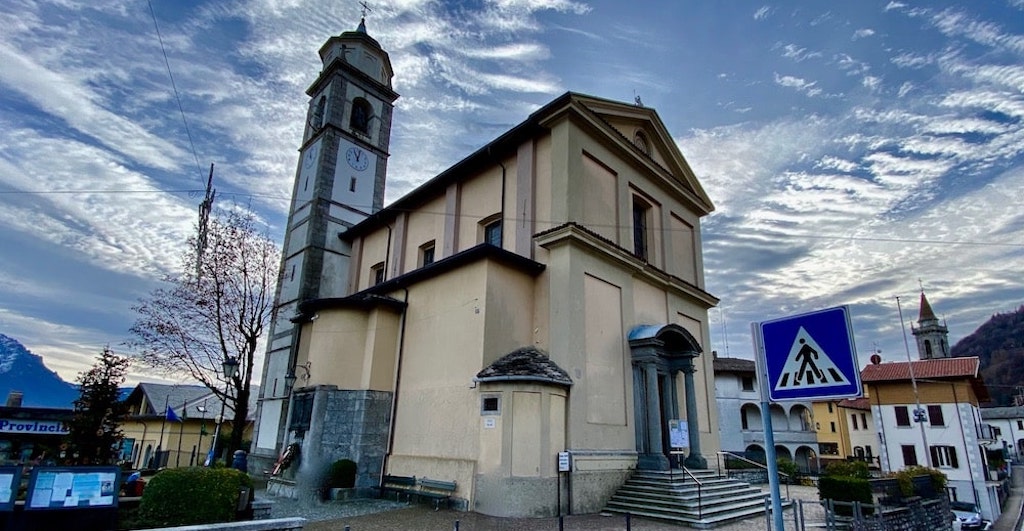 The building, which is located inside a
Chiesa Santa Maria di Loppia, Via Melzi d'Eril, Bellagio, CO, Italia
127 Views